Destruction and heroism! by Claire

My 2year old is no shrinking violet. From the moment she was born some form of drama followed and it has been that way ever since. Everyone says the second child is wilder than the first, they talk about the 'terrible twos' but I had no idea what people meant. My eldest wasn't a saint by any means and she is prone to adding a bit of 'dramatic flair' to the most mundane of incidents  (good or bad) but when 2year old gets going ..
Recently, My 2year old locked herself into the bathroom, of course, the key on the inside of the door, was stuck! So all my coaxing trying to get her to turn the key (in the hope it would come out and we could try sliding it under the door) was in vain. A lot of odd things went through my head..e.g. if I can't get her out, then can I get food in to her (exactly how long did I think she'd be stuck for?)! Or if I break down the door how would I ensure she wasn't standing behind it! Or who does one call in a situation like this .. Locksmith.. Fire brigade .. Supernanny etc.
Anyway, while I was busy being totally irrational, I heard my eldest daughters voice coming from, what sounded like, inside the door! My clever madam remembered the small top window was open and had climbed up on a garden chair and stuck her head in.By the way, this window is  usually closed because I would be at work during the day, but thankfully, as fate would have it, today it was open. With my assistance my 8 year old was able to shimmy through the window and through a clatter of deodorant cans and makeup bottles she managed to jump down and unlock the door and calm returned to our house.

Later on that evening I heard my 8 year old  on the phone to her grandmother relaying the events and her heroic endeavours..to quote 'Granny, I saved a life today' (and that's the dramatic flair I mentioned earlier!). And (because I'm such a grown up & was feeling left out of all the praise) ..all I could say was 'I helped too!'. 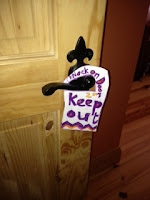 My 2yearold had recovered exceptionally well from her traumatic experience... laying on the couch with her hands behind her head, without a care in the world. Or was she planning her next attack ... because somewhere between then and the following morning she managed to stuff my printer full of small dolls and dolls accessories. So when I went to print, it made a weird groaning noise, lights started blinking and it stopped dead! Luckily, I happen to be good with printers and such, so I drew on my extensive technological knowledge and concluded that I needed to hit it a few times! It worked, it spewed out half the contents of a dolls house and it started working again!
Moral of all this ... I don't have a clue maybe ... take keys out of doors; even better remove all doors, and hide all toys ... And always have an extra child around the place as they come in handy when heroics are needed!
Posted by Claire at 14:18