The Crown Jewels By Claire

My grandparents used to live near an old castle, and when I was little and visited, I would make up stories about the castle, a King, Queen and Princess etc. I would play dress-up with my grandmothers clothes and shoes and she would let me play with her jewellery, and that was the best part. I always believed she was given the jewellery by the queen who lived in the castle, and my grandmother never said anything to the contrary, so from then on my grandmothers jewellery was called 'The Crown Jewels'. I was a very imaginative child! (My imagination wasn't helped by my uncle telling me he would take me to visit the queen in the castle someday..Still waiting uncle (you know who you are!!)). 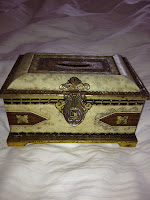 Anyway, I digress, when I was about 8 or 9 my grandmother gave me some of 'The Crown Jewels'. And I, Knowing their worth, hid them for safe keeping from my sisters. They stayed hidden over the years, through various house moves and I had completely forgotten about them,until today.

I was looking, in an old loom box, for my old first holy communion chain to give to my daughter for her communion ..... when I found a dusty old box. The box itself, in my mind, reeks treasure..my dad gave it to me when I  was very young, it was filled with sweets at the time and had its own tiny padlock and key.. it was the perfect place to put my valuables.

I opened it the little box and inside were 'The Crown Jewels' over 25 years later and just as I had left them!!!
I am going to get them cleaned up and then I will pass them on to my 7yrold daughter.. I can't wait to see her face ...she will love them. 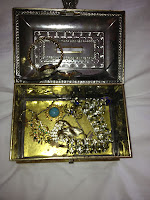 The mum of all trades said...

That is a lovely story. I would go with the crown jewels version, she would love the whole idea of it.

Did you know that you can generate cash by locking special pages of your blog / site?
To start you need to open an account with AdscendMedia and use their content locking plug-in.